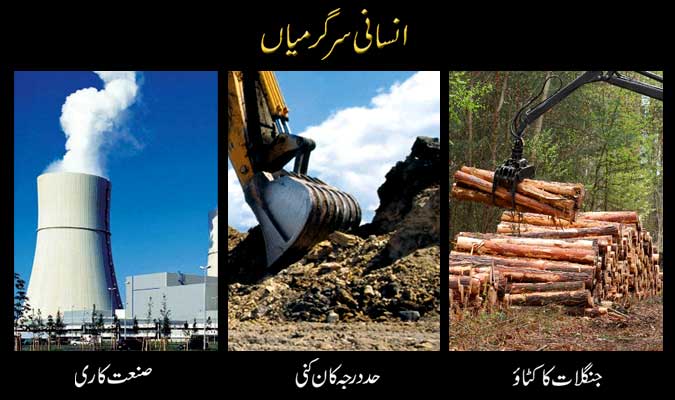 Before learning about the causes of global warming in Urdu and English, you need to know the ground realities about the earth’s climate system that makes life thrive on this beautiful but fragile planet.

Do you know the earth is wrapped in a thick layer of greenhouse gases which acts as a thermal blanket for the earth? This layer consists primarily of water, carbon dioxide, nitrous oxide and methane. The solar radiation, which serves as a source of energy for all life on planet, passes through this blanket to reach the earth’s surface.

After passing through the atmosphere, the sunlight warms the earth’s surface and the remainder of the solar radiation is bounced back into the space.

But the blanket of greenhouse gases traps and absorbs most of the outgoing heat which is re-emitted in all the directions. As a result, the surface of the earth and lower atmosphere get warmer.

The Cause of Global Warming:

The factors responsible for global warming can be grouped in two categories, i.e. natural causes and human influence. Let’s discuss and evaluate their effects one by one. If you like, you can also read the causes of global warming in Urdu.

The natural phenomenon responsible for global warming include the orbital changes, volcanic eruptions, variation in solar radiation and movement of crustal plates.

The Synthetic Report (SYR) issued by the Intergovernmental Panel on Climate Change (IPCC), published in 2015, confirms the clear and growing influence of human activities on the climate change. The report observes such influence across all the continents and oceans of the world.

The IPCC (scientific and intergovernmental body) is 95% sure that human activities are the major cause of the current levels of global warming. The report also finds that the more the human influence disturbs the climate system, the greater the risks of severe and irreversible impacts for people and the ecosystems.

Various economic and other human activities cause the accumulation of air pollutants and greenhouse gases in the atmosphere, like carbon dioxide, chlorofluorocarbons, methane, nitrous oxide and water vapors. Such elements trap the radiation that has bounced off the earth’s surface and radiate it back to the surface.

The researchers have developed a close relationship between global warming and harsh weather. The rising temperature causes hotter and longer heat waves and droughts, stronger hurricanes and heavier downpour.

The tropical storms pick up more energy and become more powerful and devastating.

Meanwhile, early snowmelt, unprecedented water shortages, heavier flooding, spread of infectious diseases and extinction of many animal and plant species are some of the other causes of global warming.

Alarming and Interesting Facts on Causes of Global Warming:

Hadith About Time in Urdu

Hadith About Eyebrows in Urdu

Hadith About Praising Someone

Hadith About Lanat - Is Cursing Someone Permissible in Islam?

A Cook Without Head

Obesity Causes And Treatment in Urdu

Dua For Victory and Success

Dua For Jumma To Earn Sawab

Dua For Peace of Heart